Are you a digital economy monk? 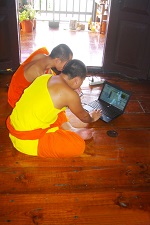 The difference in these scenarios is the amount of mental bandwidth consumed before your real work gets underway. The first scenario is essentially a set of brain power enhancing rituals that are completed almost without thought. The second is a sequence of mental bandwidth raids, whereby you start your workday mentally exhausted.

One of the side effects of the digital economy is the myriad of ways in which your attention can be diverted away from what you really need to do. This is why we also hear mention of the attention economy. Those that can acquire the most attention from others win.

The upside is that some distractions provide insights you wouldn’t have acquired if you stuck to the plan. So it is not all bad. However I believe that to thrive in the digital economy one needs to have the discipline of a monk in order to ensure your mental bandwidth is used for your purposes rather than given freely to those with greater mental discipline.

Click here to learn more about the Intelligent Leadership Hub.

Resources to transform your business

Paying (with your) Attention in the Digital Age

This website uses cookies to improve your experience while you navigate through the website. Out of these, the cookies that are categorized as necessary are stored on your browser as they are essential for the working of basic functionalities of the website. We also use third-party cookies that help us analyze and understand how you use this website. These cookies will be stored in your browser only with your consent. You also have the option to opt-out of these cookies. But opting out of some of these cookies may affect your browsing experience.
Necessary Always Enabled
Necessary cookies are absolutely essential for the website to function properly. These cookies ensure basic functionalities and security features of the website, anonymously.
Functional
Functional cookies help to perform certain functionalities like sharing the content of the website on social media platforms, collect feedbacks, and other third-party features.
Performance
Performance cookies are used to understand and analyze the key performance indexes of the website which helps in delivering a better user experience for the visitors.
Analytics
Analytical cookies are used to understand how visitors interact with the website. These cookies help provide information on metrics the number of visitors, bounce rate, traffic source, etc.
Advertisement
Advertisement cookies are used to provide visitors with relevant ads and marketing campaigns. These cookies track visitors across websites and collect information to provide customized ads.
Others
Other uncategorized cookies are those that are being analyzed and have not been classified into a category as yet.
SAVE & ACCEPT